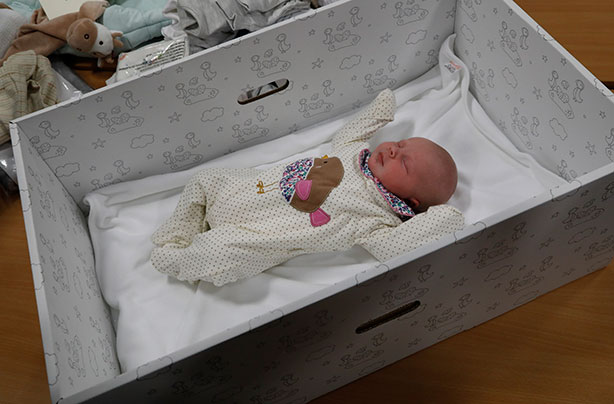 The scheme, which provides new parents with a box of essentials to help them care for their babies, was first launched in the UK in June 2016 and has been gradually being extended to reach more and more parents across the country.

First Minister Nicola Sturgeon handed out the first Scottish boxes at the beginning of this year to start the trials, and now it’s been announced that Scottish mums and dads will see the scheme in all hospitals across the country.

Although the baby boxes have been available previously in various UK locations, the move marks the first time that they will be available to all expectant mothers in one part of the country.

The boxes will contain a range of items, including clothing, nappies, cotton muslin squares, toys, a travel changing mat and a bib, plus a mattress, fitted cot sheets and satin edged cellular blanket, to allow the boxes to be used as beds for newborns if parents wish.

Colleen Groves, a mum-to-be who will be receiving a baby box, told BBC Scotland: ‘I really like the idea of it being a safe sleeping space. I would probably use it more during the day, rather than at night-time. I would use it as a sort of living space for putting down for naps during the day.’

Women due to give birth on or after 15 August have been given the opportunity to register for their baby box at midwife appointments since June, and these boxes are now being sent out to their home address or other preferred location.

From January 2018, mothers will receive the boxes at least four weeks prior to their due date.