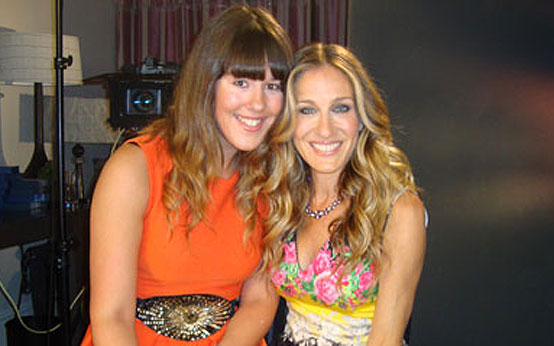 It’s clear from talking to Sarah Jessica Parker, 47, that she loves being a mum to her three children, James Wilkie, 9, and two-year-old twins Marion Loretta and Tabitha Hodge.

Since rising to fame as Carrie Bradshaw in the hit TV series Sex and the City, Sarah is now married to actor Matthew Broderick (and has been for almost 15 years!), has three young children and continues to work as an actress, fashion muse and United Nations Ambassador. But just like many working mums she struggles to find the right balance between work and family life.

While in town to promote her latest film, I Don’t Know How She Does It, goodtoknow caught up with her to talk exclusively about the challenges of motherhood, keeping the kids entertained and baking brownies for their birthdays.&

You and your character Kate have very different jobs but it must be just as difficult trying to manage time with your kids, how do you do that? How do you prioritise?

‘I don’t always have control over how time is prioritised. I think like a lot of working mothers – you know what’s required and what has to get done in a day so you just kind of muddle through. But I’ve learned from a lot of other mothers – I’ve learned from my sister how to try to manage a day, I have a lot of friends that are mothers who work in and out of the house, so I’ve watched how they’ve been successful. I really learn a lot from others – sometimes I’ll read about a mother who I’ll never meet who I think is really impressive and remarkable and that’s been helpful. I’m much more inspired by others than I am by myself.’

What tips or advice would you give mothers nowadays who are striving to have it all?

‘I’m always loathed to give tips because I think that there are millions of other mothers who do it far better and who have less support than I have! But this idea of having it all is good I think on the one hand because I think it really makes you strive for the things that are important, but on the other hand, I think you need to have realistic expectations in the back of your mind and to sort of know that perfection is probably not achievable and to forgive yourself for the shortcomings.’

In the film, there’s a funny scene where Kate buys a cake from the shop and pretends it’s homemade for the school bake sale – do you cook or bake? Do you have a signature dish?

‘I do cook – I don’t know if I’m any good but people eat it, generally without complaint! I’m not a great baker, there’s a few things that I do really well, a few and that’s it, but baking is a very scientific mathematical task – it doesn’t really suit my personality. I like to make things up on the fly and you can’t really do that with baking soda – it has a specificity that’s required, but we get by.

‘But for my children’s birthdays I do try to make their cupcakes and brownies or whatever their request is. I wouldn’t say it’s deserving of being sold in a bakery or anything but they like it, what do they know?’

What do you think are the advantages of being an older mother?

‘Perhaps patience and some perspective – I think now when I’m in a room and there are three children all saying ‘mum’ at the same time, or I should say screaming ‘mum’ at the same time, I might not have handled that so well in my twenties. There are mothers who are that young who seem to be naturally gifted and they’re incredibly patient and they handle all of that beautifully, but for me I might not have been as patient as I am wanting to be now.’

When the kids are bored and screaming and restless, what do you do to keep them entertained?

‘I think anytime you can put on music and say:’Let’s everybody dance’, it’s hilarious. It stops people from crying, it stops fighting, they think it’s funny if we try to dance for them, they love music, they’re very proud of their moves so that’s a nice distraction.

‘My children love dried mango so I kind of hold it out as a treat and offer that up sometimes to stop the tears – I know that’s probably a no no. I find books are a good distraction so are puzzles, anything that really occupies their mind.’

What the funniest thing your kids ever do?

‘I think it’s pretty funny when we’re all travelling in the car and they’re all vomiting at the same time, that’s pretty funny. You’ve got to laugh!’

I Don’t Know How She Does It is out in cinemas on Friday 16th September.