Arthur character Mr Ratburn comes out as gay and has a same-sex marriage during the season 22 premiere.

In the episode, titled ‘Mr Ratburn & the Special Someone’, titular character Arthur and his friends carry out an investigation into their teacher’s home life.

During this, they initially believe that he’s getting married a woman they think is bossy (voiced by Glee star Jane Lynch), and they want to stop him from marrying someone who would make him miserable.

Turns out they were wrong, and the woman they assumed was his fiancé was actually his sister, and she was only being blunt because she wanted his wedding to go smoothly. That makes sense.

‘But if Patty is his sister then who is Mr Ratburn marrying?’ Exclaim Arthur and friends, before it’s revealed he’s marrying a man.

Though the characters did not explicitly mention it, the episode certainly made it clear as the two characters are pictured walking down the aisle and dancing together. 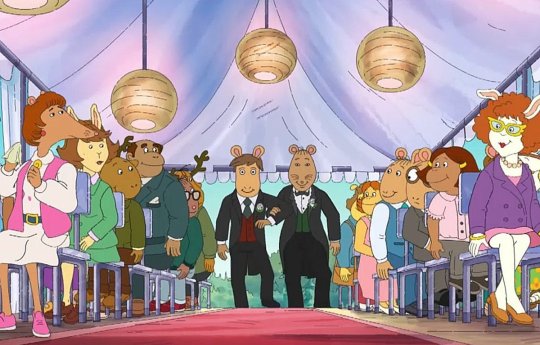 The kids seemed more interested in how nice the cake tasted, which seems exactly how children would respond!

Mr Ratburn’s sexuality has been widely praised on social media, particularly on Twitter.

Other users were more shocked that the iconic kids show was still going. To be honest, we had no idea either!

Since its debut in 1994, the popular PBS animated series has aired 239 episodes around the world – many of which have been shown in the UK on the BBC.

A whole host of celebrity guests have recorded voice-over for the animated series, including Matt Damon and Joan Rivers.

With this recent storyline being welcomed by so many across the globe, we are interested to see what’s coming next in its 22nd season.

Following the reaction on social media, the cartoon’s creators at PBS KIDS have said the episode was pivotal in reflecting the ‘diverse communities’ that young people live in.

In a statement to PEOPLE, the network said: ‘PBS KIDS programs are designed to reflect the diversity of communities across the nation. We believe it is important to represent the wide array of adults in the lives of children who look to PBS KIDS every day.’

What do you think of this recent episode? Let us know your thoughts.