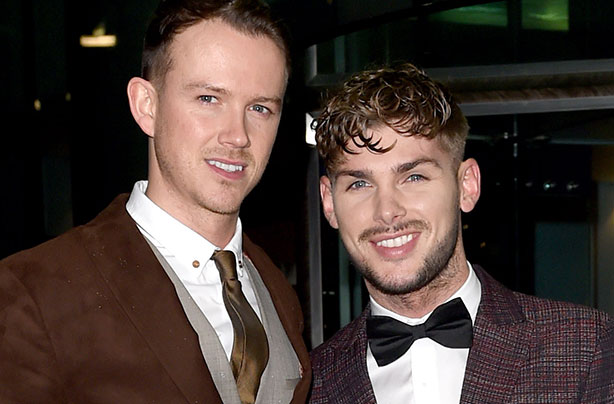 Kieron Richardson has opened up about his first few days with his newborn twins.

‘We planned it, we knew we were going down this route with the IVF so we knew that we were going to get babies at some point, and now they’re here.

‘You can’t really prepare yourself, you think you can by buying everything, but until they’re in your arms and you have that overwhelming feeling of love [you can’t],’ he told Whats On TV at the British Soap Awards.

‘After a couple of days when they start opening their eyes and you’re feeding them, oh my god it melts your heart.

The Hollyoaks actor, 31, took to Twitter at the end of May to announce the happy news that his children had arrived, sharing a picture of two hospital tags which confirmed the baby names the pair had chosen for their new additions.

‘Welcome Chase and phoebe rae x,’ he wrote alongside the sweet snap.

Kieron, who plays Ste Hay in the Channel 4 soap, and Carl tied the knot in April 2015, and revealed that they were to become parents in December of the following year, with a festive video that ended with the couple holding up a banner reading ‘Twins coming 2017’.

‘We wanted to wait to see whether we needed to buy pink or blue, but now we know we can buy both colours, as we’re having our very own Prince and Princess,’ he said to the site.

The twins’ birth is all the more poignant as the soap star has admitted that it hasn’t been an easy road to fatherhood, explaining that he and Carl had endured a series of failed IVF attempts in previous years.

‘Unfortunately, like anyone who is trying for a baby through IVF – whether they are gay couples or not – it is a lottery,’ he disclosed to The Mirror in November 2016.

‘The statistics when we first started it were a 70% success rate.’

‘We have tried it four times, with the same surrogate mum, and we have fallen into that 30% bracket of it not working. But we have not given up the fight and are still continuing. We are going to keep trying until it is successful.’