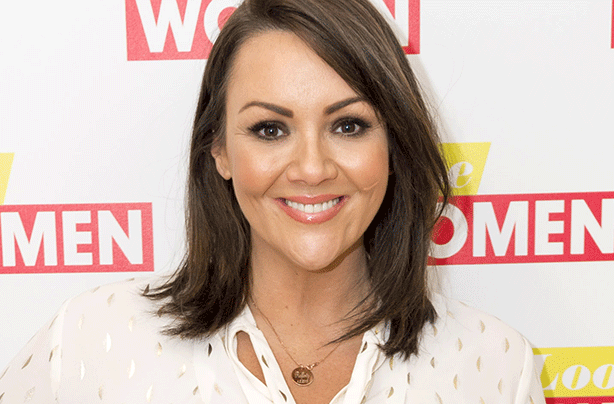 Martine McCutcheon is back on our tellies thanks to the Love Actually reunion and we could NOT be more excited.

She’s already spilled the beans on the upcoming plot points, telling ITV’s Loose Women panel that her character Natalie and Hugh Grant’s Prime Minister are still happily married, and that she’s thrilled to be back with the cast.

‘Me and Hugh are like chalk and cheese – that’s what makes us work. He’s nervous about dance scenes, where as I go, “Yeah!” and get stuck in. We bring the best out of each other,’ she explained.

However, whilst she’s now every inch the movie (and Comic Relief!) star, Martine hasn’t always been as bubbly and confident as she appears.

Speaking to Essentials magazine, the former EastEnder previously revealed that it had been a long journey to find body acceptance, explaining that at the beginning of her career she’d struggled to find clothing to fit.

‘I’ve always had to work a bit harder to find clothes that flatter my body shape,’ she confessed.

‘Even when I was a size 8, I had an hourglass figure with boobs and thighs – there were times when I was younger I found it really hard because I couldn’t fit into a sample size 4. Being in the public eye, you are constantly scrutinised and compared to girls who are five foot tall and a size six – it’s crazy because I’m not a model and it’s not my job to be that tiny.’

Martine has designed fashion ranges for ‘all shapes and sizes’ in the past, saying: ‘The term ‘plus-size’ can be insulting, especially if you’re referring to women who are a size 16 and under. The average woman in the UK is a size 16, so to call them ‘plus-size’ is just not accurate.’

‘It doesn’t matter what size you are, every woman will have hang-ups about certain parts of their body, but if you put on the right outfit, you can suddenly feel your best again,’ she continued.

‘It’s all smoke and mirrors – creating illusions with certain angles and cuts that are failsafe. My shape is naturally very soft and feminine, so I need structure in my clothes to balance that.’

‘I love curvy bodies, women like Halle Berry, Penélope Cruz, and Beyoncé  are great because they celebrate being women. Besides, you learn that none of what you see in magazines is real. I’ve seen them all on the red carpet and they’re beautiful, but none of them are perfect.’

The mum-of-one, who gave birth to son Rafferty in February 2016, added that motherhood had given her a new perspective on identity and work life balance.

‘Some women feel they lose some of their own identity in motherhood, while others just glow from being a full-time mum,’ she said. ‘I don’t think anyone should feel guilty about keeping your own sense of self, as well as being the best mum you can be – and if that means going out to work, you should.’