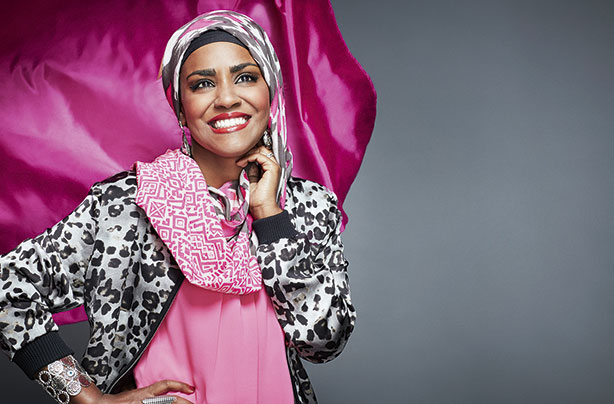 The 31-year old Great British Bake Off star, who looks stunning in the glossy cover shoot, confessed she sometimes misses spending her days at home with her children, son Musa, nine, and two daughters, eight-year-old Dawud and five-year-old Maryam.

‘There is such a stigma attached to being a housewife, but I loved being a stay-at-home mum. Sometimes I think people forget that what I had was a luxury. There are so many women out there who would love to stay at home with their children, but can’t. Yes, I sacrificed my career for that time, but it was a choice I made and it was worth it. I’d do the same again given the same choice. I never felt frustrated, in fact I miss my old life sometimes.’

Life certainly looks very different for the former Leeds housewife these days. Between writing and promoting her new book, Nadiya’s Kitchen, baking the Queen’s birthday cake and making regular TV appearances, she barely has time to sit down but she’s loving every second. And she admits she has her husband Abdul to thank for it all.

‘As the children got older, I started to think, ‘What on earth am I going to do with myself when they’re all at school?’. My husband said, “In the ten years that we’ve been married, you’ve lost your confidence, and you need to do something to help you get it back”.

‘So one day, he came to me and told me he’d started the application for Bake Off and had filled in 11 pages of the 16-page form. I thought I’ll humour him, but I’ll never get in. And then when I did, I thought, ‘What am I going to do? I can’t do this!’ I’m just glad I didn’t completely panic and pull out.’

And so are we! We all fell in love with Nadiya over her weeks in the Bake Off tent – and her hubby gained quite a few fans too!

‘When he first appeared on the show, I couldn’t believe the reaction from women on social media,’ laughs Nadiya. ‘I mean, sure, he’s a hunk, but we had people tweeting and asking him for his skincare regime! I thought, “What regime? He puts water on his face!”. I kind of got a bit offended, I thought I’ve been on there for ten weeks and I don’t get half that reaction and he goes on for two minutes and Twitter goes wild. It was really funny.’

The couple, who have been happily married for 10 years, were set up by their fathers and only met in person on the day they got engaged.

Nadiya’s spoken out in defence of arranged marriages in the past, however, she’s very wary of the idea that she should be defined by her religion or headscarf.

‘When I first walked into the Bake Off tent, I did look around and think, ‘;I am the only Muslim in here’. However, I didn’t think too much of it until afterwards when the show went out and people started reacting. There was definitely more support than there was negativity – there was a little bit, but if you look for it, there are negative people everywhere. I try not to give them any attention.’

Instead, Nadiya focused entirely on her bakes and did her best to swallow her nerves.

‘Before we started filming Bake Off, I was petrified,’ she admits. ‘It wasn’t about being on television – despite watching the show every year, that didn’t even dawn on me – I was just so consumed with the actual baking and scared of failing miserably.’

Of course, Nadiya needn’t have worried – and it wasn’t just her baking skills that bloomed and blossomed on screen.

‘Week by week, I think I grew in confidence,’ she says. ‘I didn’t realise at the time, but watching it back, you can actually see my posture change from crouched into a ball to slightly more straight by the end. Being able to do something for myself away from the children means that I’ve got my confidence back as an individual.’

And while she can’t wait to tune into this year’s Great British Bake Off when it starts late August, she’s still not keen on watching her own episodes back. Her hilarious facial expressions might have been a hit with audiences but she had no idea her face was so expressive

‘When I saw myself on television, I said to my husband, ‘Does my face actually do that?! Thanks for warning me!’

Read the full interview with Nadiya in the latest issue of Essentials, on sale now.