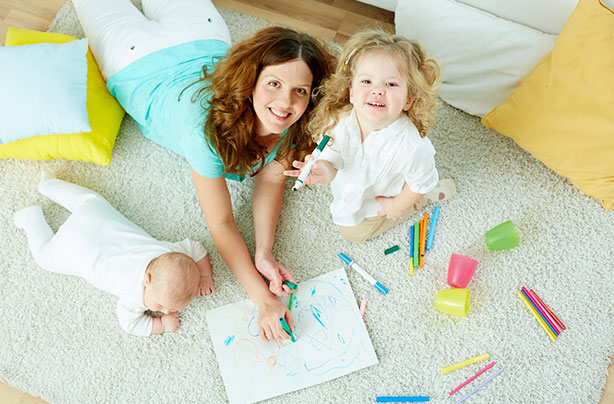 A new study from Childcare.co.uk has revealed that a huge proportion of UK mothers are choosing childcare over becoming stay at home mums, valuing the benefits of playing with other children and positive role models over anything else.

Once maternity leave is over, so many mums are faced with the difficult decision of whether to go back to work or not. Not only torn by the emotional decision to leave their child with someone else, childcare can cost a small fortune.

But fascinating discoveries by childcare.co.uk show that women are open to the positive benefits of opting for childcare and a focus on their career more than ever before,and they’re not letting the cost hold them back.

In fact, in a survey of 4,087 parents, 93% said that cost is actually one of the lowest things on their priority list when choosing childcare.

Benefits such as having another positive adult influence in their child’s life and mixing with other kids far outweighed the cost of childcare – and when it comes down to picking the right person it’s all about what your gut tells you.

38% agreed that instincts play the biggest part in knowing which childminder is best for your child, regardless of the cost, whilst 25% were most bothered by location.

Christel Hawkins, a working mother from Cricklade, Swindon said, ‘As a mother of an only child, I believe it’s important for him to get regular play with children his own age. Mixing with other children has taught him skills that I couldn’t if he was at home with me, it’s great preparation for school.’

And it’s not just about what benefits one member of the family, many mums believe that working gives them an added purpose and healthy mindset which will benefit the family as a whole.

Christel appreciates the work ethic she was raised with and sees women keeping a career as a positive, ‘working means more than money to me, it’s also about instilling a work ethic. I was raised in a household where my mother was the main breadwinner therefore paying for childcare so I can earn a wage is second nature’

Family and parenting expert for Childcare.co.uk, Jo Wiltshire points out, ‘Let’s be real, no one enjoys forking out for childcare, no matter where you live or salary, chances are a large proportion of your earnings pays for someone to take care of your child, but the cost is not the be all and end all.’

‘The decision to work for many families is out of their hands, for the majority of the UK we don’t have a choice. You either work or sacrifice your income to be with your children.’

Jo continues, ‘Keeping careers on track, assisting children’s development, along with having financial independence are just some of the reasons that many parents accept part of their salary will leave their account to pay for childcare.’