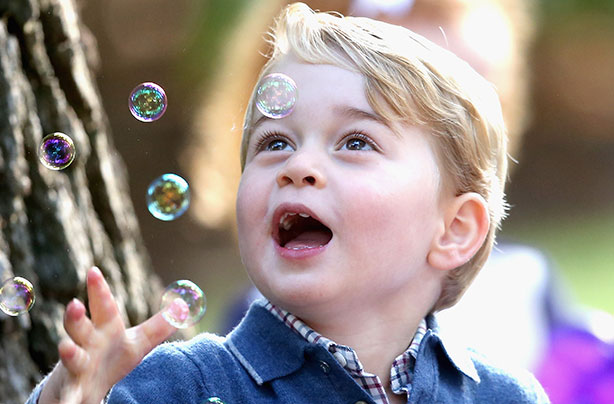 Prince William, Princess Kate, Prince George and Princess Charlotte attended a children’s party on 29th September, and it may have been the cutest royal appearance to date.

Both of the Cambridge children were on fine form, taking delight in the bubbles, balloons, petting zoo animals and clowns on hand for their entertainment, laughing and playing with their parents – as seen in the adorable video above.

The visit is the first official royal tour for 16-month-old Charlotte – elder brother George, three, already accompanied Kate and William to Australia and New Zealand back in 2014.

They young royals already made an outing in the country when they were pictured leaving their flight in adorable coordinating blue outfits (which appear to be a theme for them during the trip.

The children have been given a wealth of treats during their stay – gifts of toys and local chocolates have been left in their bedrooms, and there is a chef on hand to cook their favourite meals (reportedly spaghetti bolognese for Prince George).

However, William did quip that he was worried about their behaviour whilst their parents are away completing more than 30 public engagements.

‘I hope the children aren’t tearing up the Governor’s House right now!’ he joked shortly after the family’s arrival, referencing the residence the pair were whisked off to after their long journey.

Kate added that she hoped the pair were asleep, telling 13-year-old Victoria Foster, who had been chosen by charity Children’s Wish to give flowers to the Duchess, that they were ‘super excited about the fact they were going to sleep on a plane.’

Before the trip, a statement from the Kensington Palace confirmed that the children would join William and Kate on their visit: ‘I am very pleased to confirm that they will bring their children, Prince George and Princess Charlotte, with them to Canada.’

‘They have received so many wonderful messages from Canadians since the birth of their children and look forward to having the chance to introduce their young family to the country.

‘This is a great opportunity to introduce their children to a major realm before things like school make this difficult later on.’

Many of the engagements during the visit will be undertaken by William and Kate alone, but as part of the itinerary for the trip, the young prince and princess are also expected to attend a children’s party on Thursday 29th September in Victoria, British Columbia.

The invite to Canada was extended to the family earlier this year by Prime Minister Justin Trudeau, who has three children of his own: Xavier, eight, Ella-Grace, seven, and Hadrien, two.

The Cambridges have reportedly travelled with an entourage of 12, including their communications team, three private secretaries, tour secretary, operations manager, personal assistant, a hairdresser and a nanny.

Canadian Prime Minister Justin Trudeau pictured with his family in 2015

In a tweet confirming the trip back in July, the official Kensington Palace account wrote: ‘TRH hold very happy memories from their last visit to Canada in 2011 – their first overseas tour as a married couple’.

‘The Duke and Duchess look forward to exploring more of Canada, from British Columbia to the territory of Yukon, when they return this autumn.’