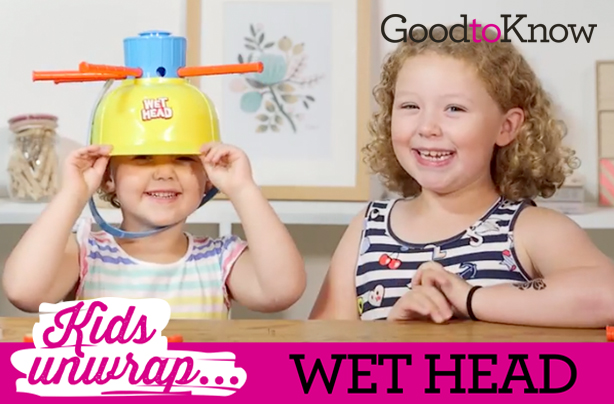 Playing with your kids is always a really fun part of being a parent, but with so many toys and games out there, it can be difficult to know which ones the children will love and which will get a slightly less than enthusiastic reaction – until you find out about toy unboxing videos, that is!

As part of GoodtoKnow’s new Kids Unwrap series, we’ve assembled an adorable panel of toy testers to try some of our favourite toys and see what they really think… and they definitely don’t hold back!

First up is the fun-filled family game Wet Head (RRP £19.99), which is apparently set to be the new Pie Face. To play, one person wears a helmet with a built in water container and eight pins sticking out of it. Players take turns pulling one pin at a time and passing on the helmet. You keep playing until the pin that empties the water container is pulled, leaving one player with a very wet head.

Four-year-old Ivy and seven-year-old Bee were the first to open the game with their dad Sergio. The little girls were clearly aware someone was about to get soaked, as Ivy laughed, shouting ‘Not THIS!’

It took some of the other children a bit of time to warm up to the idea – three-year-old Sonny told grown up Laura ‘I don’t like getting wet’, while five-year-old Reuben said: ‘I don’t want to open it now – I don’t want to, I don’t want to get a wet head’. However, when mum Lucy volunteered to take on the challenge instead, suddenly he became much more interested…

After a little bit of encouragement from the parents, the kids all loved it, with Wet Head earning a thumbs up from everyone. Sonny even said: ‘I want to bring it home with me because I really love it’. You can’t argue with that!

Thumbs up (out of three):

Next up is the Selfie Mic (RRP £19.99). This toy lets you sing along to some of your favourite songs and see yourself hitting the notes and performing on screen – you can even record yourself to play back your very own music video. All you need a a smartphone and your singing voice at the ready!

While Ivy and Bee weren’t particular fans of the microphone, getting a little shy when asked to belt out a pop hit, Reuben absolutely loved it!

Singing an enthusiastic version of Taylor Swift’s ‘Shake it Off’, this was definitely one for him, and we have to say, we think he sound amazing. Suitable for ages eight and over, this one might not brilliant for the very little ones, but older kids will love it (and let’s not pretend that the adults won’t be clamouring for a go on it once they’ve gone to bed, either).

Torch My Blazin Dragon (RRP £79.99) is the latest member of the Fur Real friends collection, and one of the must have toys for this year. Torch seemed to go down well with all our toy testers, and he’s got some rather impressive tricks up his sleeve.

As our kids found out, when you pop a bit of water in the dragon he’ll breathe out a mouthful of steam, and when you put his marshmallow accessory in his mouth, it magically starts to melt… Torch My Blazin Dragon had universally good reviews from all kids, with Ivy calling it ‘the bestest toy we have.’

Make sure you watch the video to see one-year-old Tilda’s amazing dragon roar. Looks like this may be one for the Christmas lists then!

Thumbs up (out of three):