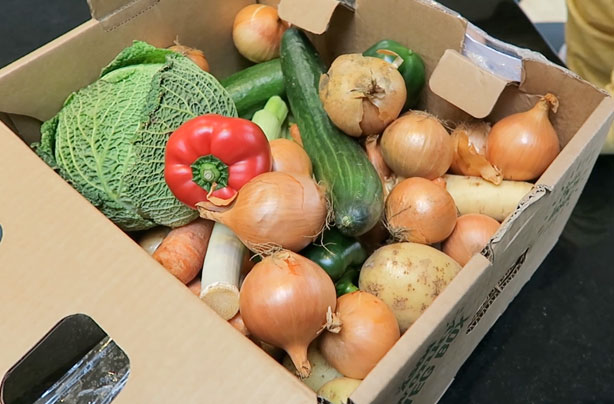 Want to find out what’s really in ASDA’s new Wonky Veg box? Looking for ideas of what to make with all the veggies inside? Look no further!

We asked our Kids Kitchen blogger Sarah to review the box and show you exactly what you get for £3.50.

Launched earlier this year, ASDA delighted us with the new Wonky Veg box selling leftover, unwanted veg that’s farmed but never makes it onto supermarket shelves in a bid to decrease food waste. The box alone will result in at least 500 tonnes of waste fruit and vegetables being sold in the supermarket by the end of 2016.

Each Wonky Veg box will include a whole variety of seasonal veggies with a great use by date too, including peppers, potatoes, onion, cabbage, leek, courgette and more. It’s said that these veggies are the ‘leftovers’ which could mean by buying them we’re reducing supermarket waste while helping supermarkets keep the price of food down – sounds good, ey?

From peppers to potatoes, carrots to parsnips, this box is heaving with all different shapes and sizes of vegetables – you won’t know where to begin!

Recipe ideas for your Wonky veg

If you’re wondering what to make with all these veggies, Sarah has suggested the following family meals. Each box provides enough vegetables for a family of four for one week – but we think you can get even more out of your box!

Sarah has worked out that in your £3.50 Wonky Veg box you have around 25 portions of food – which is a great amount of meals for such little cost!

What Sarah loved about the box

Have you bought a Wonky Veg box yet? What do you think of the idea? Comment below!