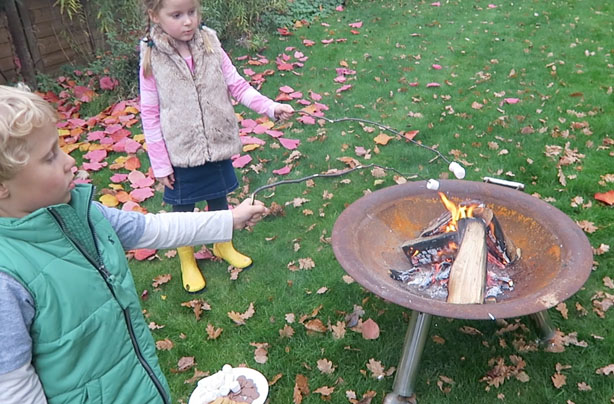 If you’ve never heard of s’mores before, they’re a bit of a craze with our American and Canadian cousins. Essentially, they’re just toasted marshmallow and chocolate sandwiched between biscuit to make a really autumnal treat that’s fun to make and deliciously sticky! If you want to know how to make s’mores, we’ve got a super tasty and really easy recipe you can try at home today. Plus, they’re a three-ingredient dessert which means they couldn’t be quicker to throw together, especially if you want something a little special but really simple for afters!

How to make s’mores

Harriet and George start off by toasting their marshmallows on an outdoor fire, making sure to not hold the marshmallows too close to the flame, as they tend to burn quite quickly.

Once toasted, the marshmallows become nice and brown and perfectly melted in the middle. Two digestive biscuits with some large chocolate buttons in between sandwich the toasted marshmallows, and that’s it! They’re ready to eat!

Our s’mores recipe uses crackers or plain biscuits – or you can even use chocolate digestives as well as extra chocolate if you’ve got a real sweet tooth. They’re perfect for bonfire night, or enjoyed after a barbecue in summer time.

Other ways to try s’mores

Once you’ve mastered s’mores you might fancy trying something a bit different. You can mix them up by using a mixture of white and dark chocolate buttons instead or you could try alternative biscuits – we think chocolate dunked cookies would be delicious. Here are a couple of other fab ways with s’mores…

S’mores in a jar

If you want to get even more creative with your s’mores, why not layer them up in a jar and make s’mores in a jar. You can serve these up at the end of a dinner party or simply to the kids with a spoon – they’re a bit less messy than the biscuit sandwich and you can get loads into each mini jar!

Or, you can try waffle s’mores. You can make a batch of waffles which only take about 3-4 minutes to cook on a waffle maker and then top them with marshmallows and chocolate and even some crumbled biscuit on top for a really indulgent snack or dessert. You could also serve these up as a weekend breakfast or brunch if you want to do something extra special.SaveSave