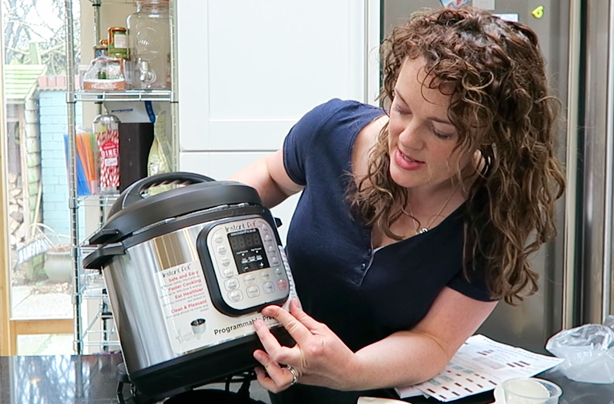 When we first heard about the Instant Pot we just knew we had to find out more about the handy little contraption, and put some Instant Pot recipes to the test, so we asked mummy blogger Sarah Barnes, from Taming Twins, to try it out for us. Could this single item really simplify meal times that much?

The Instant Pot claims to be a slow cooker, electric pressure cooker, rice cooker, steamer, yogurt maker, frying pan and warming pot all rolled into one neat little bundle. So, not only can it cook things at break-neck speed, it also potentially saves a lot of space in the kitchen thanks to its multiple functions in one.

What we wanted to know was, when cooking for a family, is the Instant Pot a God-send or is the hype misplaced? Here’s exactly what Sarah thought when she made a week’s worth of meals in her brand new gadget…

This week, GoodtoKnow challenged me to cook all of our midweek meals using the Instant Pot. It’s a pressure cooker, slow cooker and (kind of) hob combined and it’s currently being hailed as the new kitchen must have gadget for busy families. So, did it change our lives?

During the week I cooked..

The most successful dish was definitely the beef casserole, with the roast chicken coming a close second. These were cooked incredibly quickly, whilst producing really delicious, soft, tender meat. I think if you eat a lot of these kinds of meals, the Instant Pot could be a great buy and actually work out quite an economical buy in the long run.

I didn’t manage to try it during the week of filming, but I’d be interested to see how the Instant Pot works with cooking vegetarian foods, like root vegetable casseroles and pulses instead of meats. I did cook a lentil soup since making the video and it was perfectly cooked very quickly.

I had less success with the baked potatoes and rice. I think rice in the Instant Pot may just been a new skill that I haven’t quite acquired yet and needs a bit of practise. (Apparently you need different times and settings for different types of rice I’ve now found out.) As for the baked potatoes, they were delicious BUT they still need to be finished off in the oven and I’m not convinced that it saved any time making them this way. By the time the Instant Pot reaches pressure and then releases it, it may have even taken more time than popping them into the oven!

Final verdict? It didn’t change our lives but it will definitely keep its space on our worktop, especially during cold winter months when comfort food is needed.

If you’re tempted to buy an Instant Pot then you might be interested in what it can make. We’ve rounded up our favourite Instant Pot recipes. You could follow Sarah’s meal plan above or try a few new recipes depending on what you fancy. Because of its all-in-one function you can make pretty much anything in the Instant Pot in less time than it would take in an oven or pot.

Some users love to pop porridge in it overnight, ready for the morning. Others home-make their yogurt with the specified setting. You can make any regular pressure cooker recipes in the Instant Pot, but you’ll just need to adjust the timings ever so slightly. It’s recommended to cook things for around 15% longer than a standard pressure cooker to get the same results. So if something usually takes 10 minutes, it should take around 12 in the Instant Pot.

For slow cooker recipes the default setting is four hours, but you can manually adjust this to suit what you’re whipping up in the kitchen. Just remember to let the steam ‘vent’ in the settings!

Stews and casseroles are the perfect fodder for the pressure cooking setting on the Instant Pot – producing meltingly-tender meat in as little as twenty minutes. The joy of this little gadget is that you can brown in the pan before you start too, so softening things like onions to begin with doesn’t require another pan.

Get the recipes: Casserole recipes

Pulled pork is at its best when you leave it to slow cook for hours, resulting in meat that just falls apart – perfect for stuffing in floury baps and topping with coleslaw! Simply follow your favourite pulled pork recipe and slow cook it to perfection using the settings on your Instant Pot.

Get the recipe: Pulled pork recipe

You won’t get the same kind of crust as you would in an oven but you can make bread using the pressure cooking setting in your Instant Pot. It’s a lot quicker and is ideal for sandwiches!

Get the recipes: Bread recipes

Thanks to the browning setting you can make your white sauce in the Instant Pot, add in your pasta and leave it to gently tick away all afternoon in time for tea. The result? Soft pasta in a perfectly rich sauce.

Get the recipes: Macaroni cheese recipe

Curries are always better the next day, don’t you think? The Instant Pot almost creates this infusing of flavours instantly with its pressure cooking setting. Follow the recipe as you normally would and then use your manual to work out how long to cook everything for – you’ll be surprised at just how fast you can have dinner on the table.

Get the recipes: Curry recipes

Spag bol is another recipe that is delicious when everything is left to infuse gently. The slow cooker function is perfect for this, giving a rich-tasting sauce that others will think took you hours to create. They never need to know!

Get the recipe: Spaghetti Bolognese recipe

Create the perfect ribs by in a sticky, sweet and sour sauce and leaving them to marinade and cook all in one using your Instant Pot. You’ll never make them in the oven again!

Get the recipe: Sticky ribs recipe

Soup is an obvious choice to fill the cauldron-like pot in the middle of this gadget. Chuck some stock, veggies and spices in and leave to bubble away until everything is tender and perfect to blitz.

Get the recipes: Soup recipes

Sauces might not be the immediate thing that comes to mind when you think of the Instant Pot but it’s great at producing sweet and reduced sauces in next to no time. Recipes like ketchup take lots of simmering to get their rich flavour but the Instant Pot takes lots of this waiting time around with the pressure cooking setting.

Get the recipes: Sauce recipes

Risottos can take a lot of stirring which isn’t practical if you’re trying to juggle a family of little ones at the same time as getting dinner on the table. Using the Instant pot you can quickly brown off the onions, add in everything else and leave to slow cook. The rice will be beautifully soft and packed with flavour.

Get the recipes: Risotto recipes

Get your breakfast going before you even go to bed by popping oats, milk and any flavourings you fancy into your Instant Pot and slow cooking very gently over night.

Get the recipes: Porridge recipes

Baked potatoes might not seem the obvious choice to make in a pressure cooker but you’ll get there much quicker than you will using an oven. Once they’re soft and fluffy through you can pop them in the oven to crisp up and choose your favourite topping!

Get the recipes: Baked potato toppings

Another one that might seem odd to do in the Instant Pot is a whole roast chicken, but Sarah couldn’t have been happier with the results when she gave this a go. She missed the crispy skin but had a whole cooked chicken in half an hour. Plus, if you can’t let go of the crisp skin then you could always pop it into the oven for the last ten minutes to get golden – delicious.

Get the recipes: Roast chicken recipes