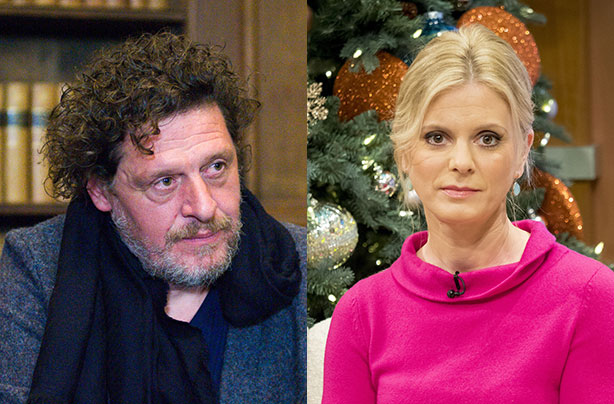 The Silent Witness star and Marco are said to have become a couple four years ago. The TV chef has three children with his estranged third wife Mati Conejero – Luciano, 22, and Marco Junior, 20 and Mirabelle, 13.

The Daily Mail reported that Emilia’s dad, English actor Edward Fox, told them, ‘Millie and Marco are not together any more. They’re great friends, but they broke up.

‘I used to get on with Marco, but I don’t see him now. Everybody has split up with someone, haven’t they? I think you should try to make things work but, at the point you think: “That’s enough’ – don’t hang on.”‘

Emilia’s father Edward continued, ‘The thing is, he’s got so many responsibilities – he’s got his children, he’s got his wife, and things just didn’t work out,’

Emilia was briefly engaged to comedian Vic Reeves and then married to Mad Men star Jared Harris for three years. Following the separation from husband Jared she went on to date actor Jeremy Gilley – the couple have a daughter together, Rose, but they split in 2011.

It would seem that Emilia and Marco have remained amicable following their break up as Edward added, ‘they are very good friends.’

Emilia, 41, and Marco, 57, have remained very much out of the public eye as a couple, and it Emilia’s father has been vocal about his feelings for his daughter’s happiness. He told Daily Mail reporter Sebastian Shakespeare:

‘[Emilia] is very pretty, and that’s a wonderful thing, but prettiness doesn’t necessarily equate to being happy.’ Continuing, he adds, ‘I’d like Millie to be happy. That’s all I want. I’d just like her to be happy at some point.’