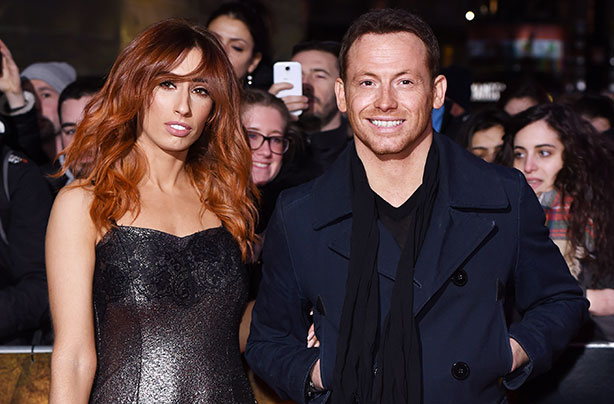 Ever since announcing that they were a couple, Stacey Solomon and Joe Swash have become one of our favourite celeb pairs. And now Stacey has given us all hope that a Solomon/Swash wedding could be on the cards!

In an interview with OK! Online, the former X Factor star and mum of two opened up about her relationship with Joe, saying it’s ‘really lovely’.

When asked if the pair were planning on getting married, she said: ‘I don’t know, ask him, see what he says! I want to come across cool, you know what I mean?

‘I can’t give the game away. We’re all girls. We know how it works!’

Opening up about the former EastEnders actor, Stacey said: ‘He’s an amazing person. He’s good with everyone in my family, everyone loves him. Even if he wasn’t my boyfriend, they’d all love him.’

The couple made their debut as a couple back in March, looking happy and comfortable in each other’s company as they arrived at the Empire Cinema in Leicester Square to celebrate the release of Season Five of Game Of Thrones being released on DVD. Wearing a glamorous metallic dress, Stacey cuddled up to boyfriend Joe as they walked the red carpet, and they couldn’t look better together!

The 26 year old from Dagenham, Essex, first rose to fame as a finalist on Simon Cowell’s talent show The X Factor, while Joe is most recently known for his presenting on ITV 2.

Both Joe and Stacey have children from previous relationships

Speaking to The Mirror at the time, the mother-of-two revealed they had been secretly dating for a couple of months and it was ‘going well’.

Stacey on The X Factor with Dermot

Stacey said; ‘It’s going really well… we’re having fun, spending time together and getting to know each other.’

Joe, 34, who is famous for his role as Mickey Miller in BBC One soap EastEnders, posted a cute snap of the pair together to his 15k Instagram followers.

He captioned the bikini photo, taken while filming in Australia for I’m A Celebrity; ‘With the beautiful Stacey Solomon.’

There had been some speculation that they were an item after they were spotted at the luxurious Champney’s Henlow Health Spa in Bedfordshire for Joe’s birthday.

A source said; ‘They were looking totally loved up as they enjoyed a night together at the spa to celebrate Joe’s birthday.’

It was also previously reported in 2010 that Joe had a crush on the Essex-born star; ‘He was gutted to hear she is dating someone but thinks he might still have a chance’, a source said at the time.

They have both been involved in other high-profile relationships since their engagements. Stacey most recently split with Steve-O, 41, from the MTV show Jackass, while Joe dated his EastEnders on-screen sister Kara Tointon, between December 2008 and May 2010. They split after it was claimed their relationship was ‘plagued with arguments.’

In an interview following I’m A Celebrity… Get Me Out Of Here! Joe explained he tries to impress on the dating scene by maintaining his glow from down-under all year round; ‘I’ve tried to keep my tan from the jungle with sunbeds.’

Tut tut on the sunbeds Joe, but we’re excited to see this pair are getting on so well!